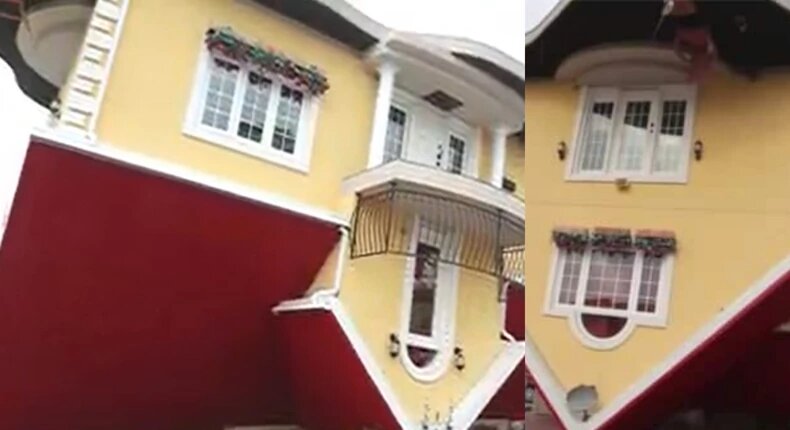 A man’s house has become a tourist attraction centre where people visit to pay a fee just to have a look at how it was built upside down and how the interior looks.

Marek Cyran from Niagara in the United States of America said he got the idea of building his house upside down after he saw it in Poland while on vacation.

However, when he returned and suggested the idea to his community members they only made fun of him wrote it off thinking it was just a figment of his imagination.

In a bid to prove that the idea was possible, Marek put channelled his mind, resources and efforts into making it a reality.

Read Also Davido Set To Do Another Huge Donation

He succeeded in putting up a one-storey building at Niagara Falls which has now become a tourist attraction centre where people visit to pay a fee and watch the exterior and the interior.

In a YouTube Video by Kool Buildings, the roof of the building appears rooted to the ground while what would have been the base faces the sky.

The interior also shows even the kitchen, dining table, bedroom and other parts of the rooms including even a decorative plant in overturned.

Marek himself is seen in the video explaining the idea behind the building while taking people round its interior. He disclosed that the nature of the house gets people dizzy while inside because their minds are forces to adapt to a totally different environment.

Credit: Pulse.ng
Kindly Share This
Dear Reader, Fetching good and credible news information is tedious and requires huge finance. We are soliciting support from our readers and fans. For as low as N1,000  you can be a part of our golden membership. Your support would go a long way in assisting us to continue guaranteeing quality news to our readers across the globe. Bank transfers can be made to: Zenith Bank 1014932118 Ireporteronline communications Inquiries: Email: [email protected] Whatsapp: +234 7032341798 FOR BUSSINESS ADVERT CLICK THE WHATSAPP IMAGE BELOW

Webcam Model Accidentally Shoots Herself In Vagina While Filming For Customers