Governor Nyesom Wike has threatened to bar Godswill Akpabio, the minister of Niger Delta Affairs, from using a road Rivers government is constructing. 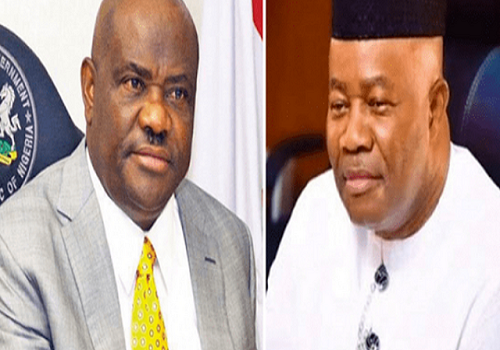 Mr Wike accused the minister of reneging on his pledge to contribute to the road construction.

“As I speak, you have not brought one naira,” the governor told Mr Akpabio. “Meanwhile, the road is almost 35 per cent ready. If you don’t pay, I’ll make sure you do not use that road to your headquarters. Because, yes, I’m not a Father Christmas.”

The Rivers governor revealed that there was an agreement between his government, the NDDC, and the Niger Delta Affairs on how to contribute to the construction.

“Mr Minister, (Akpabio), you are here. You and the MD. You told me in the Government House that you will partner the state government. You said you would bring N2.5 billion, and the state will bring N2.5 billion for the dualisation of the bypass,” Mr Wike said at the inauguration of the Muhammadu Buhari Nigeria Police Protection Unit, an NDDC 68 flats project in Port Harcourt.

Vice president Yemi Osinbajo was in Port Harcourt on Tuesday to inaugurate the project and other facilities.