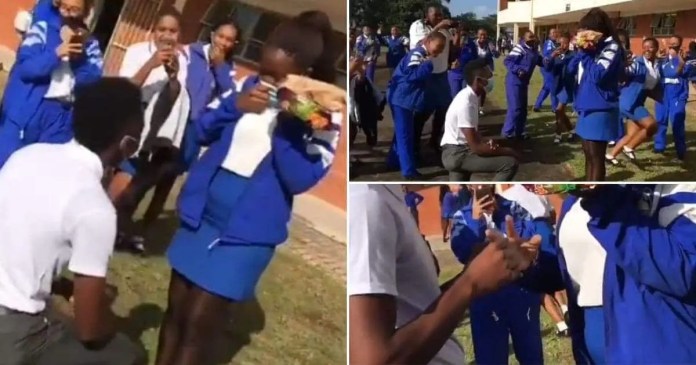 It appears secondary school relationships are getting pretty serious. Well, at least if you go by a recent video that blew up on social media.

Read Also Oyinbo Lady Twerks At Nigerian Wedding, Guests Had To Pause To Watch Her (Video)

The clip starts off with a learner down on one knee as his girlfriend looks surprised while holding a small bouquet of flowers.

In the video, it appears that the learner asked his fellow student to marry him in front of their classmates.

The other kids whistled and shouted as the young lady contemplated her answer. By the end of the video, the girl said yes and her boyfriend slipped a ring onto her finger.

Although it was not revealed where or when the video was filmed, the pupils had face masks on which indicated it happened recently.