The Boko Haram terrorists and their Islamic State West African Province faction have released the pictures of two soldiers and a Yobe State liaison officer they abducted on the Damaturu/Maiduguri highway on Saturday. 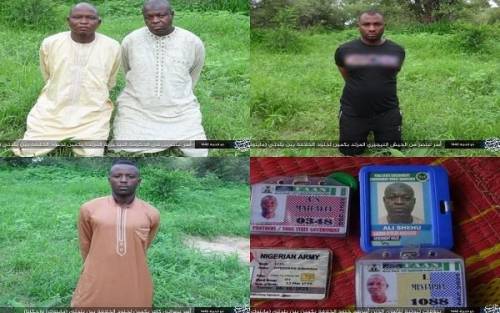 In the display of their Identification cards, two of the cards belonged to Mai Lalle, one for Mustapha while the fourth one belongs to Lance Corporal Oyediran Adedotun of the Nigerian Army.

The ID card of the fourth abductee was not sighted from the list of the cards provided by the insurgents.

According to Nation, the four victims were abducted on Saturday along Maiduguri/Damaturu highway.

While Mai Lalle and Mustapaha were travelling to Maiduguri, the two army personnel were, however, travelling to Kano State on a pass permit.

Though the pictures of the victims have been released, no contact has been made with their families yet.

Sunday Igboho In Trouble (See Why)

“Nnamdi Kanu Is Not Dead But..”