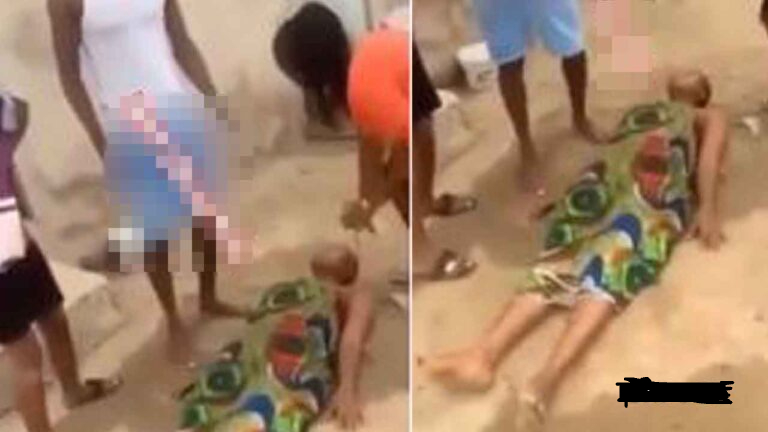 A viral video on social media sees a young Nigerian lady lying down unconscious following long hours of sexual intercourse with her boyfriend.

As sighted in the trending video, the girlfriend became unconscious following about 10 rounds of sex with her boyfriend who according to sources took in some herbal male enhancement pills prior to the intercourse.

Read Also Hilarious!! Beautiful Lady Hangs Posters In The Streets, Looking For A Man To Marry Her (Photo)

From our findings after the video surfaced on the internet, the lady herself told the boyfriend to go for some herbal male sexual enhancement pills so to make their copulation a wonderful one.

But it seems the lady couldn’t continue after the boyfriend ‘banged’ her overdose. She met her match, in fact, a tough one as such.

The boyfriend brought the lady out for help after she collapsed and his neighbours helped him in reviving her to gain consciousness.

But the man was still spotted in the mood to finish the game. His ‘Joy Stick’ in the video was seen erect and stiff ready to penetrate again. Eii! Micheal power!

Hilarious!! Beautiful Lady Hangs Posters In The Streets, Looking For A Man To Marry Her (Photo)