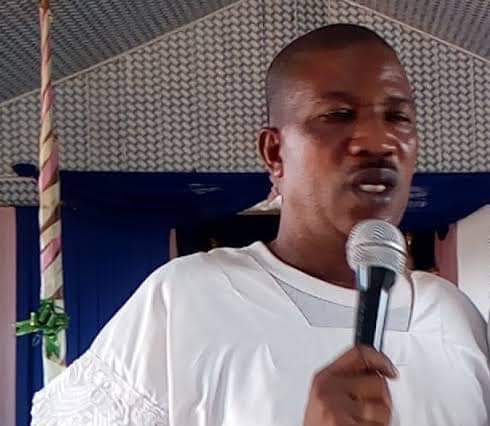 The Ondo State Police Command has confirmed the arrest of a popular Radio Presenter and self-acclaimed pastor for allegedly raping a five-month pregnant lady inside his Celestial Church of Christ (CCC) in Akure, the Ondo State capital.

The source gathered that the suspect was arrested after the 19-year-old lady identified as Bukola was allegedly raped when she came for deliverance at the church of the pastor.

According to THISDAY, the popular broadcaster was alleged to have used his manhood to apply ‘anointed oil’ inside the woman’s private part.

The presenter is very popular with human angle stories he presents on radio stations.

The Radio Presenter (name withheld) was arrested by men of Nigeria Police after the woman complained of a strange situation with her pregnancy.

Read Also Can You Beat This? Abdulazeez Purchased Toyota Camry With N2,650, See How It Happened

Narrating her ordeal to reporters at the Police Headquarters in Igbatoro Road, in Akure, the victim said the suspect used ‘anointing’ oil to rub her private part before he dipped his manhood on her.

She said: “In the morning, I went to the hospital to register. We usually have a programme every Wednesday. On that fateful day, I went to church but unfortunately, they have ended the service.

“He collected the list I brought from the hospital. He said the items in the list given to me were too much, he later said I should go and make a photocopy which I did. After I had done it, he said I should take it to the altar, he said he will pray on the list. While sitting down, he started pressing my stomach, he asked me how many months is my pregnancy? I said it is five months.

“He said that he is going to do some spiritual work for me before my delivery. He later stood up and entered a room, he called me to enter a room inside the church. He asked me to lie down which I did, he also said I should remove my clothes. I did all the things he asked me to do.

“He dipped his middle finger with oil into my private part. He said my baby is vertical instead of being horizontal. He said he would put oil in my private part and would help me insert it with his private part so that the oil would get into the baby.

“He rubbed oil on his private part and asked me to open my legs. He then had sex with me. He said he was not supposed to do it but helped me because my husband was not around.

“It was after he had sex with me that I came into my right senses. He said I should swear that I should not tell anyone including my mother. He said I would die if I told anybody.

“He did not put on his garment when we had the sex. When he was having sex with me, he gave me one small cross that I should put on my navel.

He also gave me table water and poured perfume inside, he also asked me to drink a little out of the water and prayed for me. That I should be using it and that the baby will turn to normal position within three days.”

Meanwhile, the Police Public Relations Officer in the state, DSP Funmilayo Odunlami told THISDAY that the suspect is currently in custody of the State Criminal Investigative Department (CID).

She said: “Yes, investigation is ongoing and I wouldn’t want to say much about it but I am assuring you that we will get to the root of the matter.”

Wife Caught Her Husband Cheating With A Car She Bought For Him, See What She Did Next (Video)

Can You Beat This? Abdulazeez Purchased Toyota Camry With N2,650, See How It Happened