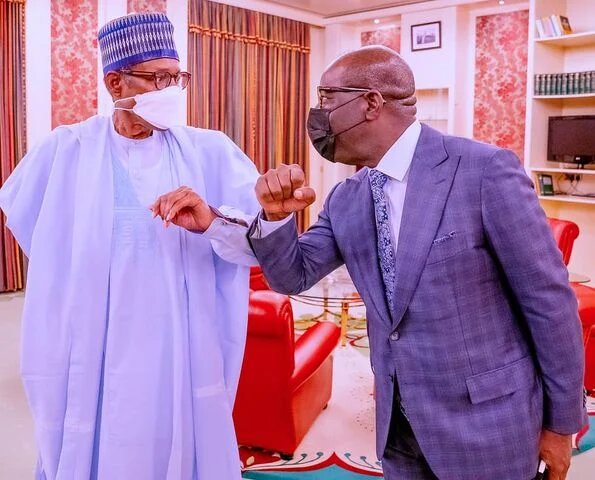 Governor Obaseki today met with President Buhari at Aso Villa. This was disclosed by the Special Adviser to the President on Media and Publicity, Femi Adesina who shared photos from the meeting on social media.

Full details of the meeting are still sketchy but one of the reasons for the visit is connected to the Grazing Law.

Obaseki said the state is yet to promulgate a law banning open grazing because it sees the venture as a private business.

He said the state is rather calling for the full implementation of the National Livestock Transformation Programme, which would help address the problem of clashes between farmers and herders.

“As you know, most Southern States have passed laws relating to open grazing but Edo State has not. Because we want to ensure that whatever laws we pass are laws that we can enforce.

“We have had extensive consultations with our people to deal with the issue that yes, we do not want open grazing because it is out modelled and outdated, however, what are the options?

“If we are asking that we should now have ranches and these cows should be constrained to specific areas such as ranches, then who provides the land?,” he queried.

The Governor noted that the people of Edo State have resolved that ranching is a private business and should be treated as such.

“Our people say that as far as they are concerned, ranching is a private business just like every other agricultural venture, therefore, those involved should provide the land. As you already know, it is expensive to run and manage ranches.

“So I came to discuss with the President that since the people of Edo would rather invest privately,  then the National Livestock Transformation Programme, which is now being implemented by the Nigerian government,   should acknowledge our model and should also be able to help Edo people benefit from the funding that is now being made available for people who want to go into the livestock business and have made investments in ranches and other similar livestock programmes,” the Governor explained.

The Governor said he also used the opportunity of his visit to thank President Buhari for the support he gave the State in returning their stolen artifacts from foreign lands.