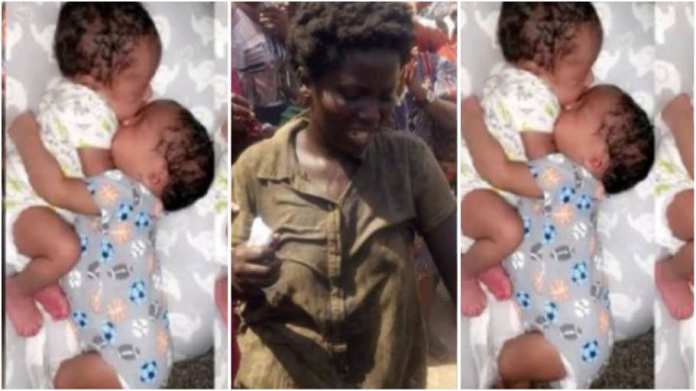 A mentally challenged woman on the streets of Obuasi in the Ashanti region of Ghana who was allegedly raped by a man identified to be a nail cutter has successfully given birth to twin boys.

Kessbenonline reported that the mentally challenged woman who was in labour was saved and taken to the hospital by a nurse who had closed from work in the evening on Monday, August 30, 2021.

“She is a well-known madwoman in the area. She’s very beautiful and has a nice body. It is believed she got pregnant out of last year’s rape by a nail cutter.

She has now successfully given birth to twin boys. For all this while she’s seen to be pregnant and most of the time she’s seen sitting in front of Obuasi Golden prat “

“She’s was in labour yesterday and sitting at her usual place, most people saw her but were afraid to go close to her. It took one nurse who was returning from work to assist her and took her to the Obuasi Hospital” He added.

“Right now as we speak the children and the mother are all at the hospital” Ogyam concluded.

“We Really Wish Buhari Was Our President” – Ghanaian Man Cries Out