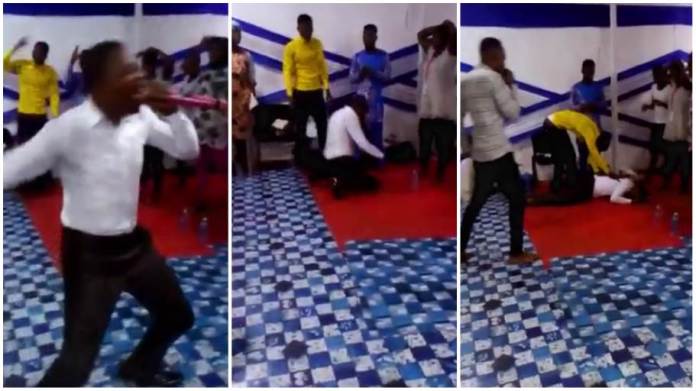 A Ghanaian pastor died while delivering a sermon before his congregants.The tragedy, which caused a huge stir on social media.

In the video sighted by Atinkanews the pastor, looking smart in his white shirt over a pair of black trousers is seen energetically uttering some prophetic words to his members.

Then he is seen moving to the other corner of the church auditorium where some of the members stood praying, and slowly went on his knees.

He fell suddenly to the ground and lay there for a while. All the while, the church members, oblivious to what was going on around them, continued their worship without trying to raise the pastor up.

Read Also 2023: Dokpesi Reveals What Buhari Will Do To PDP Leaders And Governors

This might be so because they thought he was performing some task in the spirit and so they would not want to interfere.

It is no news that some Ghanaian pastors employ gimmicks in their church service, and this caught the church members unaware.

The church members later realised the unfortunate incident after the pastor failed to get up after a considerable amount of time.

Strange As Man Is Caught Having $3x With Cow