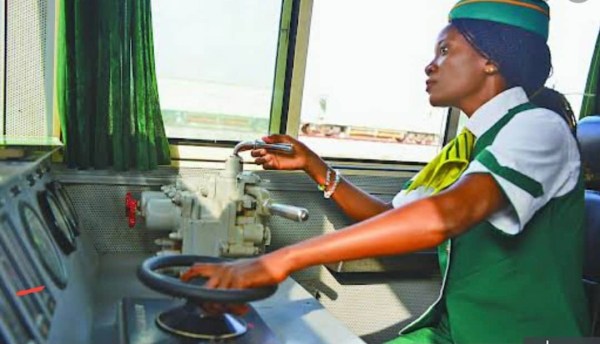 In Abuja, the capital of Nigeria, there is a large train station – Idu station. It is where the Abuja – Kaduna rail line starts, and also an important stop of Abuja light rail.

At 7:00 am, passengers would line up in front of the ticket office of Idu station, and that’s when engine driver Issa Fatimoh Abiola boards her train, which is scheduled to depart at 8:30 am, to make preparations.

The Abuja-Kaduna rail line and Abuja light rail were constructed by the China Civil Engineering Construction Corporation (CCECC) under the Belt and Road Initiative. They have turned the site of Idu station from barren land in the past into a bustling transportation hub.

Many young Nigerians like Abiola have secured jobs thanks to the rail tracks and witnessed the development and changes in the capital.

Abiola is the first woman in Nigeria that is licensed to drive a train. In 2006, the CCECC was recruiting kitchen helpers in her hometown Ilorin, Kwara State. Learning that Chinese companies were reputable and offered decent salaries, Abiola, who had just graduated from high school, applied for a position and became an employee of the Chinese construction company.

“Chinese experiences suit the development demand of Nigeria. China is sincerely helping us, and if you can speak Chinese you will have a bright future,” Abiola told People’s Daily.

As she gradually had a better understanding of Chinese companies, she became more determined to develop in a Chinese firm. She spent almost all of her spare time learning Chinese.

In 2013, tracks began to be laid for the Abuja light rail, which was built in accordance with Chinese specifications and standards.

Abiola, by her outstanding job performance, earned herself an opportunity to receive locomotive driving training, as the only female trainee.

Five years later, when Abuja light rail was officially put into service, Abiola became the only woman among the first batch of all locomotive drivers.

Transport is a lifeline for cities, said Nigerian President Muhammadu Buhari when declaring the full operation of Abuja light rail on July 12, 2018. Hailing the light rail as a high-quality project, he expressed his gratefulness to the Chinese government and people for their support for Nigeria’s development.

As an employee representative, Abiola handed a signal flag to Buhari who later ordered the departure of the first train on Abuja light rail.

“This moment was of historic significance,” Abiola said, adding that the company’s decision to have her drive the first train indicated its trust in not only herself but also all local employees.

Most of the residents in Abuja live in the four suburban satellite towns of the city, so there are four major commute routes. The roads were always jammed during peak hours, and the traffic could stay stagnant for even half an hour.

As the first light rail in West Africa, Abuja light rail has brought conspicuous changes to local transportation and the livelihood of local residents.

Abiola told People’s Daily that the light rail is punctual, and is favoured by more and more people. “It plays an important role in alleviating urban traffic pressure, and also reduces traffic accidents,” she added.

The construction of the light rail created nearly 5,000 jobs at most for the local community. And more job opportunities have been created for local residents since the project started operation, from frontier workers to key management and technical staffs.

“When I drive the train through the city, I can literally feel the benefits it brings,” Abiola said. According to her, more and more stores have been opened along the route. With increasing passenger traffic, commercial areas and communities are taking shape, she added.

“I feel very happy about the life of us, which is getting better and better,” she said.

Paschal Arinze Nnorli, regional chief of Nigerian Railways Corporation Abuja, said the light rail not only has created economic benefits and jobs but also is generating long-term and incalculable value with its safe and stable performance.

Due to COVID-19 control, Abuja light rail’s five-storey comprehensive maintenance centre was transformed into a makeshift hospital in just 40 days. The hospital, with 506 beds and covering 12,500 square meters, played an important role in Nigeria’s fight against the virus.

“Our Chinese friends are helping not only us but also entire Africa. I want to contribute my own strength to my company, and to the common development of Nigeria and Africa,” said Abiola, adding that she will still strive for a position on the driver’s seat of a bullet train once high-speed rails are paved in her country.

“I want to become the first female driver of a bullet train in Nigeria, and contribute to the ‘Nigerian speed,’” she noted.