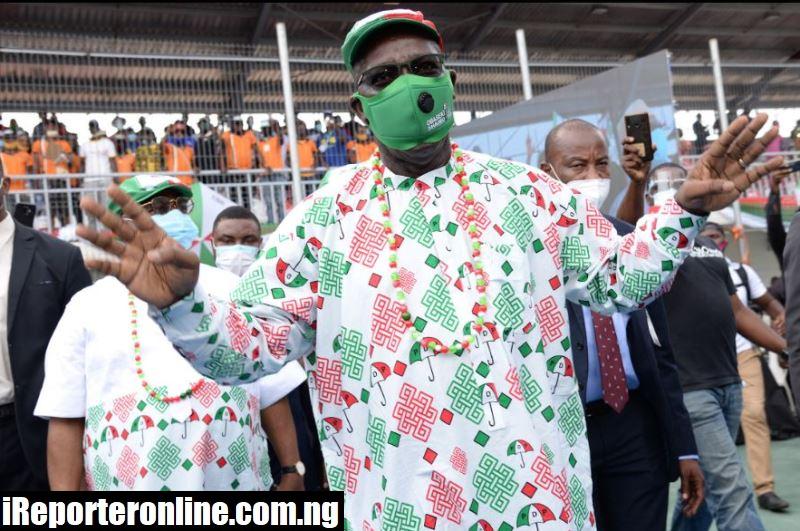 Argue your case with your neighbour directly, and do not disclose another’s secret, or else someone who hears you will bring shame upon you, and your ill repute will have no end – Proverbs 25:9-10

This is indeed hilarious and very entertaining, recall we brought you the scoops on the furious battle between Obaseki and his adopted political party the PDP. What started as a joke gradually snowballed into a dirty media war with PDP firing shots from all cylinders.

Obaseki kick-started the trouble when he invited the three musketeers of PDP namely Chief Tom Ikimi, Dr Raymond Dokpesi and Chief Mike Oghiadomhe to the government house to discuss the proposed dissolution of the party-state executive.

After the meeting was the after-party where their message was conveyed to the National Working Committee of the PDP as led by Prince Uche Secondus.

The State working committee of the PDP which was apparently left out from the plot suddenly erupted with fury, “no we can’t take this anymore, give us back our rights and take your appointments.”

Speedily the party conveyed its own message to the NWC of the PDP in a strongly worded letter that was made available to the press.

Since then hell was let loose, clearly, Chief Tom Ikimi and Dr Raymond Dokpesi failed to adhere to the words in proverbs 25:9-10 which advises friends to sort themselves out amicably without making a fuss publicly.

No the leaders thought otherwise and decided to respond to PDP’s letter of protest and consequently took to letter writing in a show of grandstanding.

The PDP would not take any of the shenanigans from these leaders, they started firing from all cylinders to the amusement of Edo Residents who obviously were having fun with the fireworks.

Gbas Gbos, the PDP dressed High Chief Raymond Dokpesi and tore him apart, they started by asking about his credibility in winning elections, they asked how come he lost his unit and ward in the Sept 19th gubernatorial elections.

After disrobing the AIT boss the PDP went straight for Chief Tom Ikimi. The Oduma (Lion) of Igueben was practically turned into a cub by the PDP’s response. We are still awaiting the response from Chief Mike Oghiadomhe, we shall update you guys once it is available.

Ikimi’s rejoinder came with the title”The Inflated Ego Of Chief Tom Ikimi, Deflated By His Actions”.

He was lectured about the rules of the game, it was an embarrassing reply that residents have taken to their social media handles to mock the High Chief.

One Facebook user, Sola had this to say, “Shame is always easier to handle if you have someone to share it with, Tom Ikimi, is a confused merchant, We only hear or see him when there is infighting in political parties, however, he is not in this alone, I think Raymond Dokpesi and Ikimi can handle the shame”

Like we earlier said ours is to highlight the drama and keep you entertained. Meanwhile, reports reaching us claims the Edo State, Governor Godwin Obaseki has made a retreat, the much-anticipated clash may be averted if the rumours making the rounds are credible.

Obaseki is alleged to have called a meeting with the State Working Committee of the PDP to seek a cease-fire. From the look of things, the battle may have reached its dead-end naturally if truly the Governor seeks a truce.

Remember to subscribe to our channels for undiluted political updates behind the curtains.