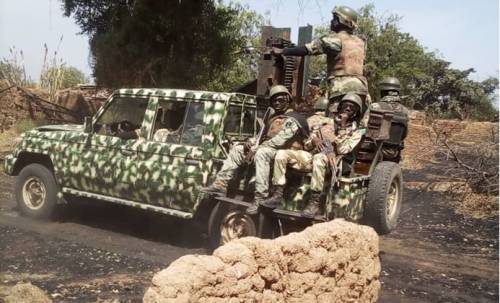 The 45 soldiers of the Nigerian Army, who were court-martialed and jailed seven years ago for demanding adequate weaponry to aid the fight against insurgency, have been released.

Initially, the soldiers were charged with mutiny and sentenced to death but their sentences were commuted to 10 years jail term after the case was reviewed.

The soldiers were released to the waiting arms of their families before they were conveyed in a bus belonging to Baptist Convention, branded “Plenty – Move Faster”, to the chambers of Femi Falana.

According to Falana, who represented them during the military court-martial, “the only allegation proved against them at the courts-martial was that they protested the refusal of the military authorities to provide weapons to fight insurgency.

“Unlike many soldiers who deserted the army, the convicts were ready to defend the territorial integrity of the country. They only made a legitimate demand for equipment to fight the insurgents who were better equipped and motivated.

“The second batch of convicts actually fought and defeated the Boko Haram troops at Delwa in Borno State when weapons were eventually made available to them.

“But for having the temerity to demand for weapons they were convicted and sentenced to death.”

THISDAY also gathered from reliable sources that they would be taken to Defence Headquarters in Abuja to meet with the Chief of Defence Staff, and Chief of Army Staff.

Also, the soldiers have been scheduled for rehabilitation in Eket, Akwa Ibom State by an NGO to ease their reintegration into the society.

THISDAY findings also revealed that 20 of the 54 inmates were brought to Ikoyi Correctional Centre and four pursued degrees at the National Open University (NOUN).

TINUBU VANGUARD CALLS ON THE FEDERAL GOVERNMENT AND THE STRIKING RESIDENTS DOCTORS TO RESOLVE THEIR DIFFERENCES.