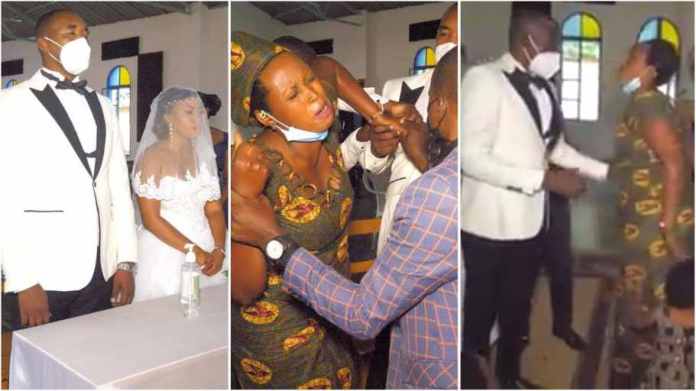 Massive drama ensues at Apostolic church when a woman stormed the premises with media men to disrupt her husband’s wedding.

The woman, who had five children for the groom, swore to not let the wedding take place, and did all she could till the event was cancelled.

Dukuzumuremyi Janvier caused a commotion, as she walked in with her young children, including a set of twins she has been single-handedly taking care of.

Wondering how she got hold of the media men? Her extreme plight (poverty) got to the attention of the Afrimax TV team, who travelled to interview her.

While being interviewed, she received a call notifying her that her husband, though separated for years, was wedding another woman without her knowledge.

As distraught as she was, as captured on tape, she invited the pressmen over to witness how she addresses the issue.

From when she carried her children to the very minute she arrived in the church premises, the cameras of Afrimax were still rolling.

After arriving in the church, she did not confront the bride whatsoever, as she directed her aggrievances to her husband.

She made quite a scene until the groomsmen calmed her down, as she narrates her ordeal to the officiating priest.

Backing her claims with evidence, she splashed photos from their wedding and private life on the couple’s table, while the bride simply watched in dismay.

The officials were forced to call an emergency meeting where the issue was addressed and a decision taken.

The meeting was concluded with advice to Janviere to divorce her husband as he was adamant on not returning to her. She agreed, with the condition that he must provide for their five children.

Her husband obliged, but it was too late to save his new marriage. The officiators backed out and the wedding was cancelled.