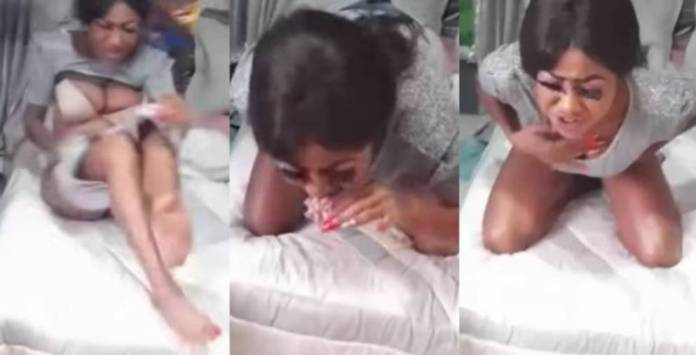 A video just hit social media and it has already started trending and in this video is a lady vomiting money and later went mad.

In a video at the disposal of AtinkaNews.net has shown a beautiful young lady whose identity is yet to be known seen vomiting money in the room whiles she tries to remove her clothes.

Money they say is the root of all evil but most ladies of recent have decided to use the easy road to making money for all the luxury stuffs that money can buy rather than working and attaining the money the right way.

According to reports, the young lady had just returned from a visit to her boyfriend’s house to only start bringing out money from his stomach causing all those who were around her to panic for the unusual behaviour of the lady.

A lot of people who have seen the video have shared their opinion about the incident with many sympathising with the young lady whiles some threw insults at her for not working and depending on men for her daily livelihood.

Credit: atinkanews
Kindly Share This
Dear Reader, Fetching good and credible news information is tedious and requires huge finance. We are soliciting support from our readers and fans. For as low as N1,000  you can be a part of our golden membership. Your support would go a long way in assisting us to continue guaranteeing quality news to our readers across the globe. Bank transfers can be made to: Zenith Bank 1014932118 Ireporteronline communications Inquiries: Email: [email protected] Whatsapp: +234 7032341798 FOR BUSSINESS ADVERT CLICK THE WHATSAPP IMAGE BELOW