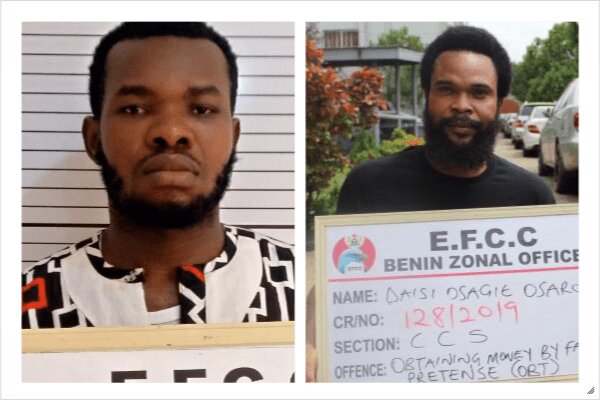 The Benin Zonal Command of the Economic and Financial Crimes Commission, EFCC, on Thursday, arraigned the duo of Ibrahim Ojo Jacob Israel and Daisi Osagie (aka Double Chief), before Justice S. M. Shuaibu of the Federal High Court sitting in Benin City, Edo State on a four count charge bordering on impersonation and obtaining money by false pretence.

According to a statement on Friday by the Head, Media & Publicity, Wilson Uwujaren, the defendants are alleged to have defrauded unsuspecting members of the public by presenting themselves as marketing officers of the Nigeria Customs Service.

One of the counts reads, “that you, Ibrahim Ojo Jacob Israel, Daisi Osagie (aka Double Chief) and others now at large sometime in 2018 in Benin City, Edo State within the jurisdiction of this Honourable Court on or about the 2nd day of February, 2018 with intent to defraud induced one Cole Emmanuel O. to pay the sum of N3,500,000.00 into Guaranty Trust Bank account No.0246816677 in the name of Ibrahim Ojo Jacob Israel pretending to be one Folounsho Oladunni, a purported marketing officer of Nigeria Customs Service, as part-payment for two cars, a representation you knew to be false and thereby committed an offence contrary to Section 1(1)(b) of the Advance Fee Fraud and Other Related Offences Act 2006 and punishable under the same Act.”

The defendants pleaded not guilty to the charge when it was read to them in court.

In view of their pleas, the prosecution counsel, Austin Ozigbu prayed the court to fix a date for trail and to remand the defendants in a Correctional facility.

However, the defence counsel, B.E. Ambrose prayed the court to grant them bail as the offence was bailable and that one of the defendants was physically challenged.

Justice Shuaibu granted the defendants bail in the sum of N500, 000 and a surety in like sum. The surety should be a civil servant of not be less than Grade Level 15.

In a similar development, the Command on Thursday, January 27 arraigned David Olasunkanmi Olalekan on an 18-count fraud charge before Justice Professor C.A.Obiozor of the Federal High Court, Benin.

The defendant who is the managing director of Ghaip Caregivers Academy is alleged to have used the pretext that his company was an affiliate of American Caregivers Association, to extort money from unsuspecting members of the public for training, award of certificate and processing of visa.

Upon arraignment, the defendant pleaded not guilty.

In view of his plea, the prosecuting counsel, F. O. Dibang prayed the court to fix a date for trial. However, the defence counsel, Abdullai Tony Dania informed the court that he had filed a bail application before the court.

Justice Obiozor adjourned till February 2, 2022 for hearing of the bail application.