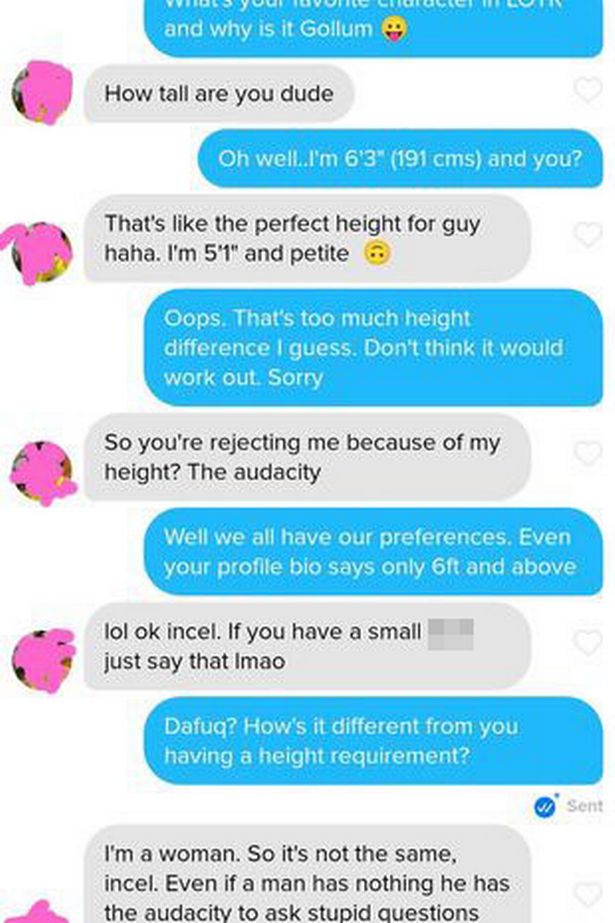 Hilarious!! Woman Who Wants Someone ‘6ft Or Above’ For Dating Finds A Man, See What Happened To Her

A woman was accused of double standards when she was rejected for being “too short”.

On her dating profile, she declared she’d only be interested in seeing men who are taller than 6ft.

But when she was judged over her height, she was furious about it.

In a message exchange posted to Reddit, she asks a fellow singleton: “How tall are you dude?”

The lass thinks she’s lucked out by chatting to the tall stranger and eagerly replies: “That’s like the perfect height for a guy haha. I’m 5’1’’ and petite.”

Wanting to give his match a taste of her own medicine, the guy replied: “Oops. That’s too much of a height difference I guess.

“Don’t think it would work out, sorry.”

The reply enraged the woman, who fumed: “So you’re rejecting me because of my height? The audacity.”

But refusing to be criticised for being honest, the lad retorted: “We all have our preferences. Even your profile bio says 6ft and above.”

Refusing to accept the criticism, the woman accused the singleton of having a “small d*ck”.

The bloke kept his cool, replying: “How is it different from you having a height requirement?”

According to the Mirror, the post has garnered 51,000 upvotes and 1,600 comments from users who were quick to share their opinion.

One person said: “As a 5’1″ female I’ve never even bothered to ask someone’s height because everything over 5’7″ feels tall to me.”

Another wrote: “Treat others like they treat you and they get mad.”

And a third added: “If women can have a height preference so can men. It should be equal. Who even uses the excuse that they are a woman. It is the same. Treat others how you want to be treated.”