It would be all bliss, pomp and pageantry as the city of Ilorin is set to host one of its biggest events in recent times. 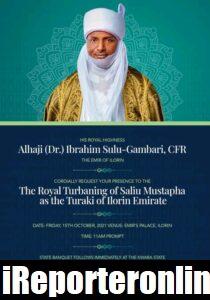 The traditional title of Turaki holds a special place in the socio-cultural system of the Ilorin Emirate, as well as other Emirates across Northern Nigeria.

Since the news filtered in, local residents have been upbeat over the event which is a rich blend of culture and tradition.

Many residents have been thrown into a frenzy over the scheduled event claiming the honour is well deserved as Mallam Saliu Mustapha is a personality which everybody knows in Ilorin Emirate, they describe him as a selfless leader who spends his wealth for the growth and development of the Emirate.

” We have known Mallam Saliu Mustapha for ages, his commitment to the development of the Ilorin Emirate and the state at large is indelible. His selflessness is second to none and we are excited that the Emirate Council has deemed it fit to honour such a humanitarian colossus.”

The City of Ilorin is expected to host the world on that very day and no doubt it would be another rare opportunity to showcase the rich culture and tradition of the Emirate Council.

The Emir of Ilorin only appoints those who have shown commitment to the development of the Ilorin Emirate in all ramifications. This has been the upright tradition in Ilorin Emirate.

The newly appointed Turaki of Ilorin, in his reaction, said he felt honoured by his community for finding him worthy of the coveted seat, assuring that the people should expect more of his good deeds.