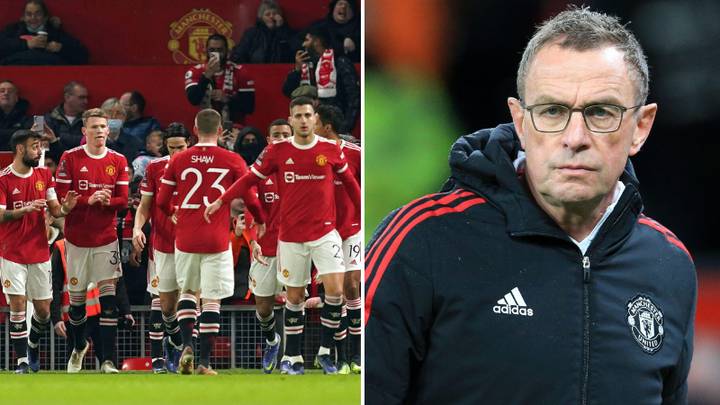 Manchester United goalkeeper Dean Henderson reportedly stormed out of the club’s training ground after he was told he wasn’t playing vs Aston Villa.

Henderson has made just two appearances for the Red Devils this term, having seen David De Gea reclaim the No.1 shirt.

According to the Webby and O’Neill Man United fan channel, interim boss Ralf Rangnick had promised Henderson that he would be starting in the FA Cup third round clash on Monday.

But then the 24-year-old was told he would not be in between the sticks and did not take it well, it is claimed.

He was not even on the bench for the 1-0 win at Old Trafford, with third-choice Tom Heaton the substitute goalkeeper.

But then the 24-year-old was told he would not be in between the sticks and did not take it well, it is claimed.

He was not even on the bench for the 1-0 win at Old Trafford, with third-choice Tom Heaton the substitute goalkeeper.

Rangnick told the media Henderson was struck down with illness.

“On Monday, was told Dean Henderson stormed out of the training ground after being told he wasn’t playing on Sunday,” Tony O’Neill said on his channel.

“We never said anything, I wanted to make sure from another source – got that.

“He was told he’s not playing but he was preparing all week. I can understand Henderson being annoyed – he’s second string and not getting a chance.

“Him storming out, preparing to play and then being told you’re not playing, is understandable. [He’s] a young lad and wants to play.

“The excuse from Rangnick himself for him not even being on the bench was that he was ill but there was no description of what illness.

“Checked my source, I’m happy with it.”

After the Villa win, Rangnick confirmed Henderson had put in a transfer request but it was swiftly rejected.

“A couple of weeks ago he asked me but I told him I’d rather have him stay until the end of the season,” Rangnick told talkSPORT.

“We are very happy with our goalkeepers but if it’s up to me I wouldn’t want him to leave.”

Having been recalled from his loan at Sheffield United, Henderson made 13 Premier League appearances last term and looked like he was on his way to displacing De Gea.

However, he’s been unhappy with his lack of game-time this term, making just two starts in the Carabao Cup and Champions League.